After setting up the racing squad in 2003, we decided to challenge Oxford to a varsity race having met them at BUSA that year. The first race took place in the Solent on Sigma 38s on Sunday the 30th of November 2003 and was organised by Tim Houghton (Cambridge) and Jacqui Catherall (Oxford).

The race was conducted as part of the Hamble Winter Series because neither club had the resources to organise an event itself. It was also felt that fleet racing was most appropriate for the yacht race, as that was the type of racing both teams were competing in. Oxford won after a good performance in drizzle, rain, and fog, but the event had been established and has been raced every year since.

The race is normally run just before BUSA and after the end of Lent term, in order to give both teams time to train up some of their new intake and get a bit more training before BUSA. The racing normally takes place during a Sunsail regatta weekend, but entering other races, such alternating between the Fastnet and Cork or Cowes Week has been mooted for the future if funding can be found. The CUCrC donated a cup, which is awarded to the winner each year (see picture).

Varsity 2018/19 took place as part of the final Sunsail regatta race weekend before BUSA. The winner is the team which places highest on points in the regatta. 7 races were completed across the two days. The first day offered windy conditions, circa 20 knots and a sum of various things going wrong, part due to equipment, part not. By the end of the day of four races, we had come in front of Oxford in two races and behind in two, but were down to Oxford by a point due to relative places.

The night saw us raise a glass to a hard day's sailing with our competitors and friends in Oxford over a dinner out in Cowes.

Sunday saw three races in even windier conditions. Race 5 saw us regain the lead on points placing two spots higher than Oxford. Race 6 saw another switch in position with Oxford placing two spots higher than Cambridge bringing it all down to the last race. With many tense moments and lead switches, Cambridge gained a narrow lead around the final marks and managed to hold it for an extended final upwind beat.

With big thanks to Jordan Billiald as team coach 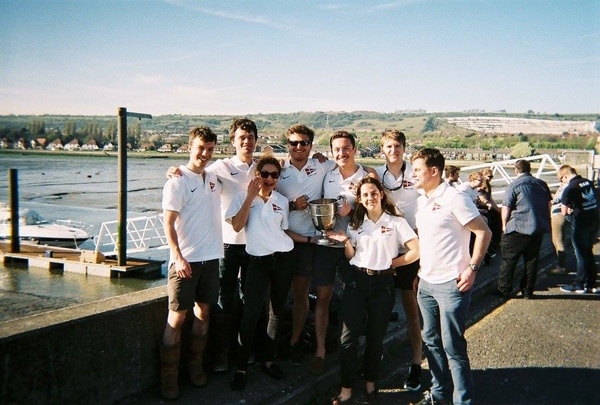 The weekend got off to a bad start with Oxford winning the first race while Cambridge struggled in light airs off the start and finished in fifth. Cambridge then switched on and took the second race win with such a lead that some of the fleet got timed out, Oxford were left in 7th. The final race of the day was very close, with Oxford in 1st and Cambridge in 3rd. After the first day, we were tied for points.

The second day saw Cambridge take control with a 2nd in the first race to Oxford's 4th and a win in the final race with Oxford back in 4th. Not only did Cambridge beat Oxford and take the Varsity Cup but we won the overall regatta with counting scores 1,3,2,1.

The fifth varsity race was again held during a Sunsail regatta weekend. Both universities entered two boats, but agreed not to team race and aim for a high overall position (the highest position to win) in order to win a free weekend's sailing out of Sunsail! After a varied weekend of racing with a lot of other university crews, both Cambridge boats beat the Oxford boats.

The fourth varsity race was held during the now traditional Sunsail regatta weekend. The weekend was immediately before BUSA so a lot of other university teams entered, ensuring excellent training. Unfortunately, after a very close and windy day of racing on Saturday, Cambridge was pushed into a collision with another boat on the start line on Sunday and couldn't recover, enabling Oxford to take the cup.

The third varsity race was again held during a Sunsail regatta weekend. After two days of close racing in the eastern Solent, Cambridge lost to Oxford by a single point in the last race.

For the second varsity match, Oxford and Cambridge entered boats in a regatta of 20 boats run by Sunsail. Both sailing with new crews, Oxford got the better start in the first race, but Cambridge had much better boat speed, and managed to overtake not only Oxford but the rest of the fleet by the windward mark. Cambridge extended its lead around the course and finished first, with Oxford close to the front of the fleet on Cambridge's heels. In the second race of the day, Cambridge got a much better start and was again ahead by the windward mark. Again Cambridge stayed ahead throughout the race and finished first.

Both boats were delighted to discover on coming ashore, that having come first and second in the Sunsail regatta, they had both won a free weekend sailing in November at the Sunsail finals, and are looking forward to coming head to head again then. The Cambridge racing officer was Sarah Chapman.

The inaugural varsity yacht race. We had a very windy training day on the Saturday; although this was a lot of fun, it meant both boats were unable to get much technical practice in, particularly on spinnaker work. Nevertheless, in the calmer weather on Sunday the crews managed admirably and quickly got to grips with what for most was a new class of boat, and for all a new group of people. Unfortunately, Oxford were better on the day and we lost to them. However, we gained a fairly good position in a fleet of well maintained and regularly raced Sigmas, which we were pleased with. With the experience of the new members racing is attracting, we hope to be a much more competitive boat next year and take the Varsity race to a higher level.