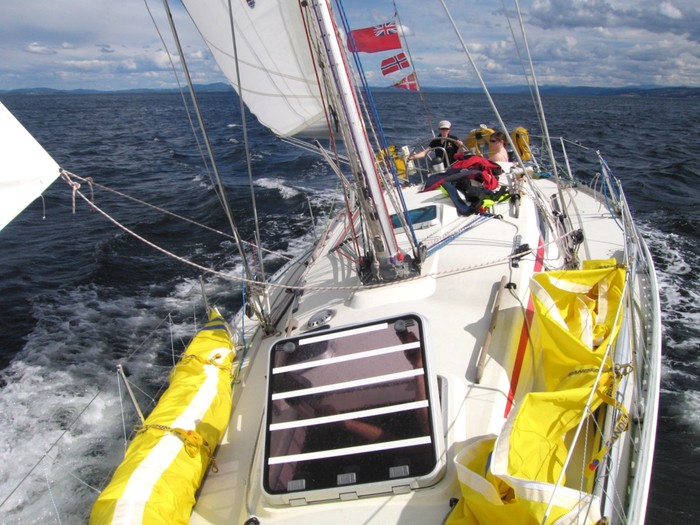 CUYC had been hiring yachts for trips since 2002. By 2008, club reserves had become sufficient to take out a loan to purchase our own club yacht. It was felt, and has since been proven, that there was sufficient demand for trips to support the purchase and maintenance of our own yacht, putting trip fees back into the club, rather than giving them all to hire companies.

Owning our own yacht Kestrel has allowed trip fees to be reduced by around 25% compared to hire companies, as well as allowing us flexibility to plan trips and decide our own itineraries, most notably the five hugely adventurous summer cruises we have done so far to the Baltic (twice!), Norway & Scotland, Round Britain and Ireland and most recently to the Canaries.

We have also been able to offer RYA Practical Training Courses such as RYA Day Skipper, to complement our successful RYA Shorebased training programme.

Most recently in October 2012, the CUYC Committee voted to buy a second yacht. The idea was to buy a smaller, newer yacht, with 6 berths, that was more easily handled by novice skippers and trainees, with the primary purpose to be used to expand our capacity to provide RYA Practical Training Courses. We will still provide some training, most notably Yachtmaster exam training on Kestrel, but a 6 berth smaller yacht will be more cost effective and allow us to offer RYA courses at the same prices as our standard cruising trips, giving a huge saving for junior members compared to commercial centres. Moreover, a smaller yacht will be easier to command and handle, allowing trainees to take charge earlier and for longer before the instructor has to help.

Going hand-in-hand with this second yacht was the idea to retain a full-time club instructor and "boatman" to look after the maintenance of both Kestrel and Puffin. Chris Hawkesford, a previous Commodore of CUYC and an experienced Yachtmaster Instructor, took on this role in the first year of ownership of Puffin. In 2019, however, with Chris having moved on, the club sold Puffin and reverted to just managing the one yacht: Skylark.

We sold Kestrel, having sailed her for 10s of thousands of miles, and in 2016 we bought Skylark to replace her.

And we still hire/charter yachts... Even with our own club yacht, there is still enough demand and interest from club skippers that we hire other yachts either for racing, or to go to new places that we can't easily get our yachts to such as the Mediterranean and Wales...