The Adventure of a Lifetime on the Baltic Sea

Lisa Klaasen, an undegraduate at Sidney Sussex and beginner sailor with CUYC, gives an account of a two week trip from Turku to Stockholm as part of the 2019 Baltic Summer Programme. A tale of remote wooded islands, saunas, sea shanties, freshly baked bread on board, friendly locals, and of course great sailing! Read on...

Our journey began in Turku, where eight individuals had come together from various corners of the globe to explore the wonders of the Finnish and Swedish archipelago. I had wanted to learn to sail for several years, and felt that CUYC offered a secure and fun programme in which I would feel comfortable acquiring skills as a novice. Encouraged by my correspondence with Hywel, the skipper, who reassured me that Finland’s calm waters and beautiful islands were ideal for learning to sail, I was thrilled to begin this two-week adventure across the Baltic Sea.


The evening prior to boarding ship, we initiated ourselves in Finnish culture at ‘Viking Restaurant Harald’, where we were greeted with a hearty meal of stewed elk and reindeer tenderloin, skewered on an appropriately hazardous sword. Appetites satiated, we made a final stop for a Finnish pint before retiring to bed for an early rise. The next morning we headed to the shops to buy enough supplies for the first week, a venture involving five trolleys transported from one bank of the city’s river to the other by ferry. 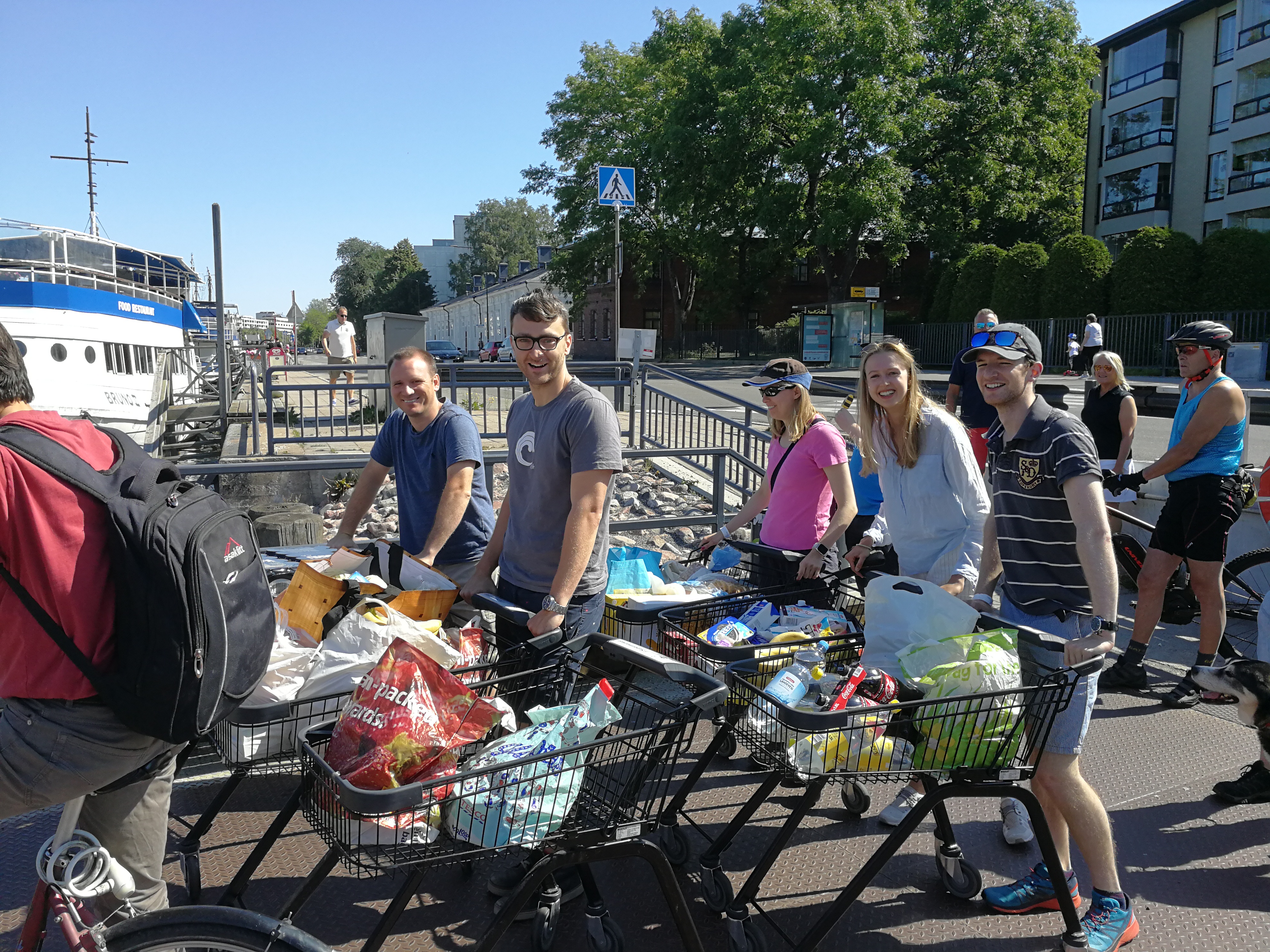 Transporting Groceries on the Ferry in Turku


Stocked on supplies, we were ready to leave the port and hoist sail where the mouth of the river Aura joins the Archipelago Sea. Our first evening on Skylark was a memorable one. Midway to our first island, we received a radio transmission from a Finnish crew, inviting us to join them at a party on another island. Following a unanimous decision that one must always accept an invitation to a Finnish party, we changed course and made our way to the island through GPS coordinates. Upon arrival, a crew member of the Finnish party informed us that we would not be allowed to anchor next to their boat, which was sailing code for ‘you and your Brexit-voting kind are not welcome here’. Undeterred, we anchored on the other side of the small islet, determined to enjoy our evening with a BBQ at sunset. Our attentions were suddenly diverted as helicopter blades began to circle above us like a scene from a Bond film, and two men in harnesses were released onto the island. We later discovered that the coast guard had been called to assist with a dislocated shoulder on the Finnish party boat. As we had two doctors among the crew, we agreed that perhaps they should have let us anchor next to them after all. 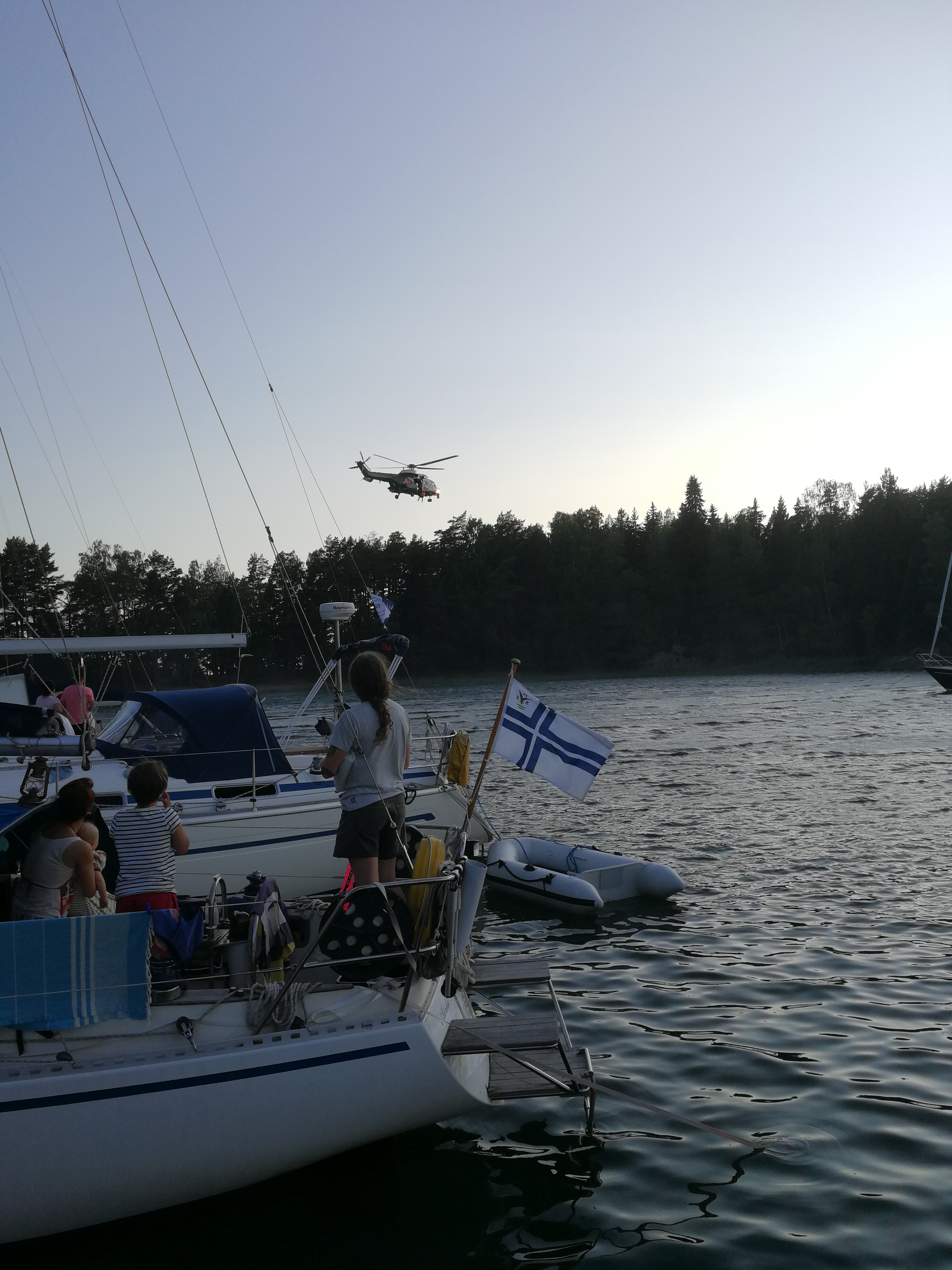 
The first few days on board were challenging and rewarding as I learnt the different manoeuvres of sailing, knot-making and the parts of the boat. I quickly discovered that learning to sail is not something achieved by reading about it - one has to observe, act and repeat. Learning to tack is particularly memorable, and my winch handling steadily improved as my fellow crew members shouted encouraging cries to “Go on!!”


The conditions were blissful, and we were greeted with days of sunshine and relatively calm water. It took a few days to acclimatise to the almost 20 hours of daylight that Finland experiences in summer. Long evenings were spent on deck playing charades and card games, set against the flushed beauty of seemingly eternal sunsets. Each day brought new natural wonders, as we anchored at Bjorko, a small island with a freshwater lake that was ideal for an evening swim. We had the opportunity to swim almost each morning, and I quickly determined that a dip in the ocean before breakfast is the optimal way to start the day. The following morning we were met with our very first stormy conditions. 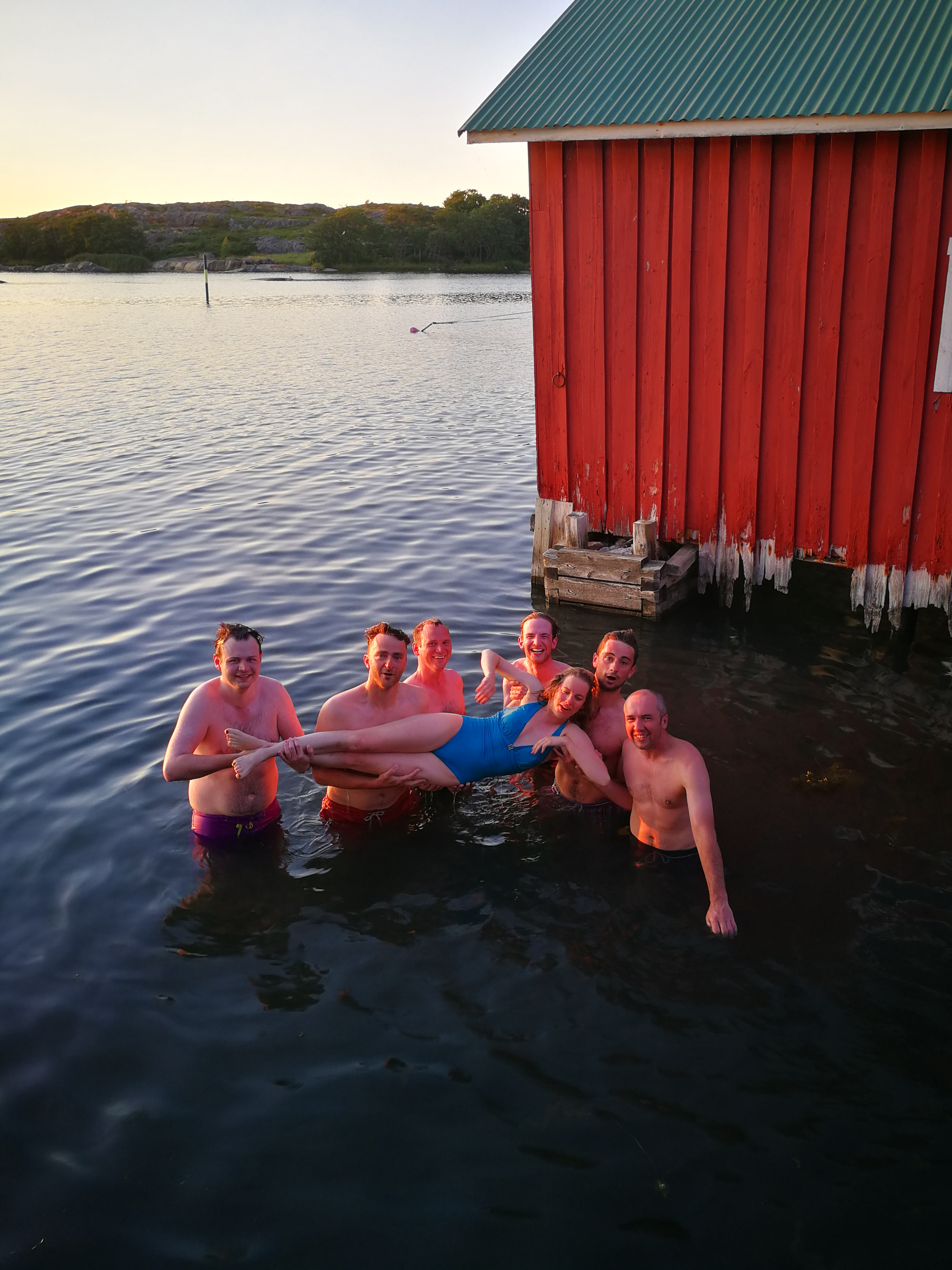 
Our thermals and fleeces finally came in handy as we layered up in waterproofs and life vests. As we encountered the first big waves a fellow crew member turned to me, grinning, and said, “Now this is sailing”. I felt delighted as a child as we swayed along with the motion of the boat, our singing of sea shanties interrupted only by an occasional spray of salt water. In the evening, we anchored at the lovely harbour Osterkar, to enjoy our first Finnish sauna experience. After a series of attempts to reach the 90 degree heat limit, we jumped in the cold, refreshing water, and collectively agreed that living in Finland wouldn’t be such a bad idea.


After a week we arrived in Mariehamn, the capital of the Aaland islands, also known as ‘the heart of the Baltic Sea’, that marks the halfway point between Finland and Sweden. Our stop provided the opportunity to purchase supplies, take hot showers, and do laundry. Although the shower was readily embraced, I was surprised at how wobbly and unheimlich, as the Germans say, it feels to be back on land, and found myself longing to be back at sea as soon as possible. Feeling fresh and restocked on supplies, we left port to begin the crossing to Sweden. This turned out to be one of the most exhilarating sails of the trip, as we encountered strong winds, mighty waves, and a tiny bird who took refuge from the storm on the side of the boat. Nestled on the port hull, we cried words of encouragement to Jeff, as we named him, to stay on board and not get swept away by the waves. After a few close calls, he perched on First Mate Matt’s shoulder for a brief instant, before flying off as we advanced towards the coast. 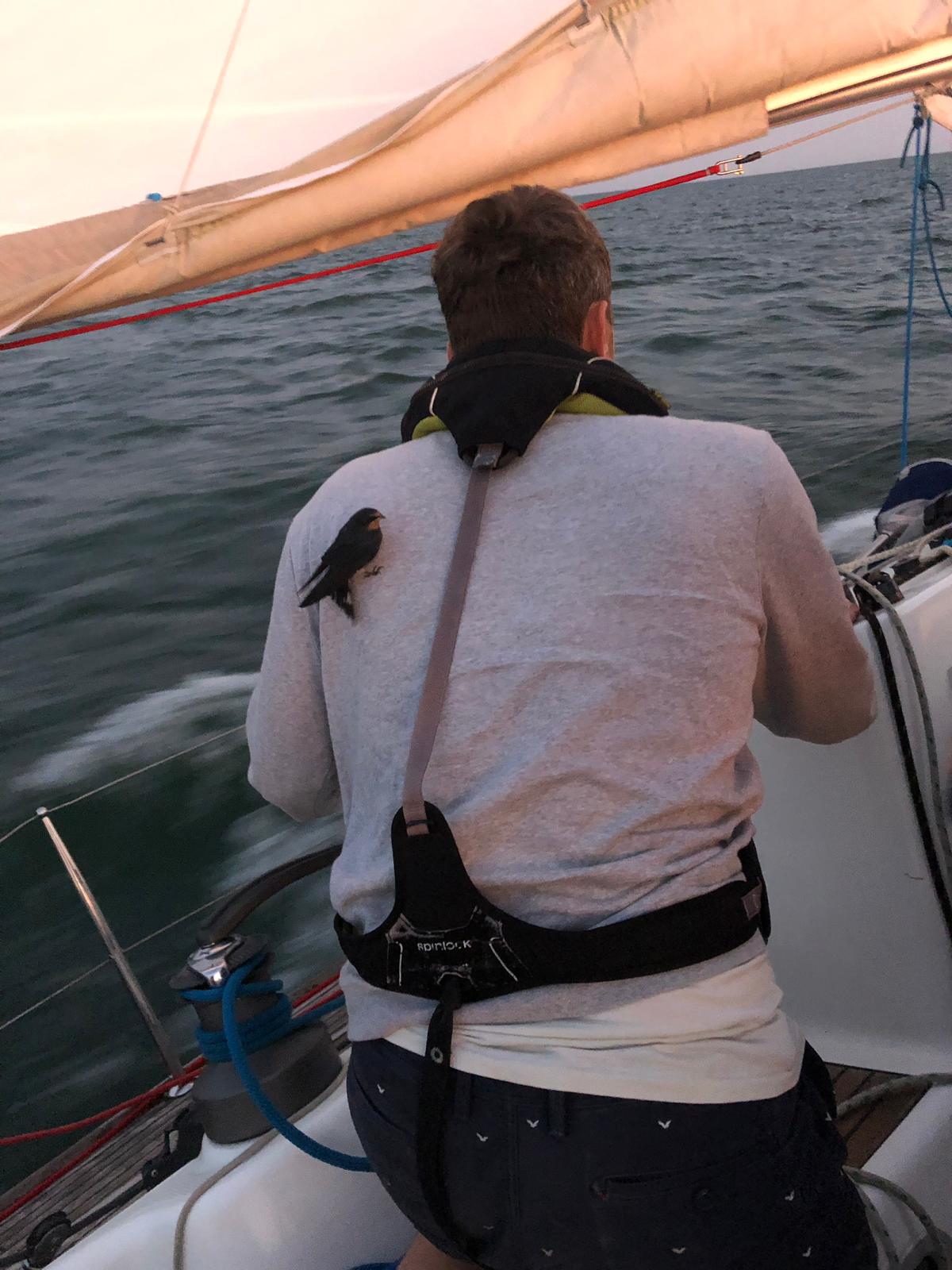 
We moored at a Swedish anchorage on a rare occasion of darkness, and following a game of cards we went to bed, sleepy and content after the long sail, waking up to the sight of a beautiful islet. After a morning wander picking fresh blueberries, we returned to the boat to discover that we had run out of bread. Strange, considering we did a very large shop the day before! Opening all the lockers, we realised that we had forgotten to check out an entire trolley at the supermarket. This turned out to be a happy trifle, as Hywel, our Skipper, proceeded to bake loaf after loaf of warm, delicious bread in our small, rocking oven without a thermostat. The bread inspired several kitchen adventures, as a feast of fresh pasta, cookies, apple crumble and a Russian dish called pelmeni were all brought out on deck from Skylark’s galley. 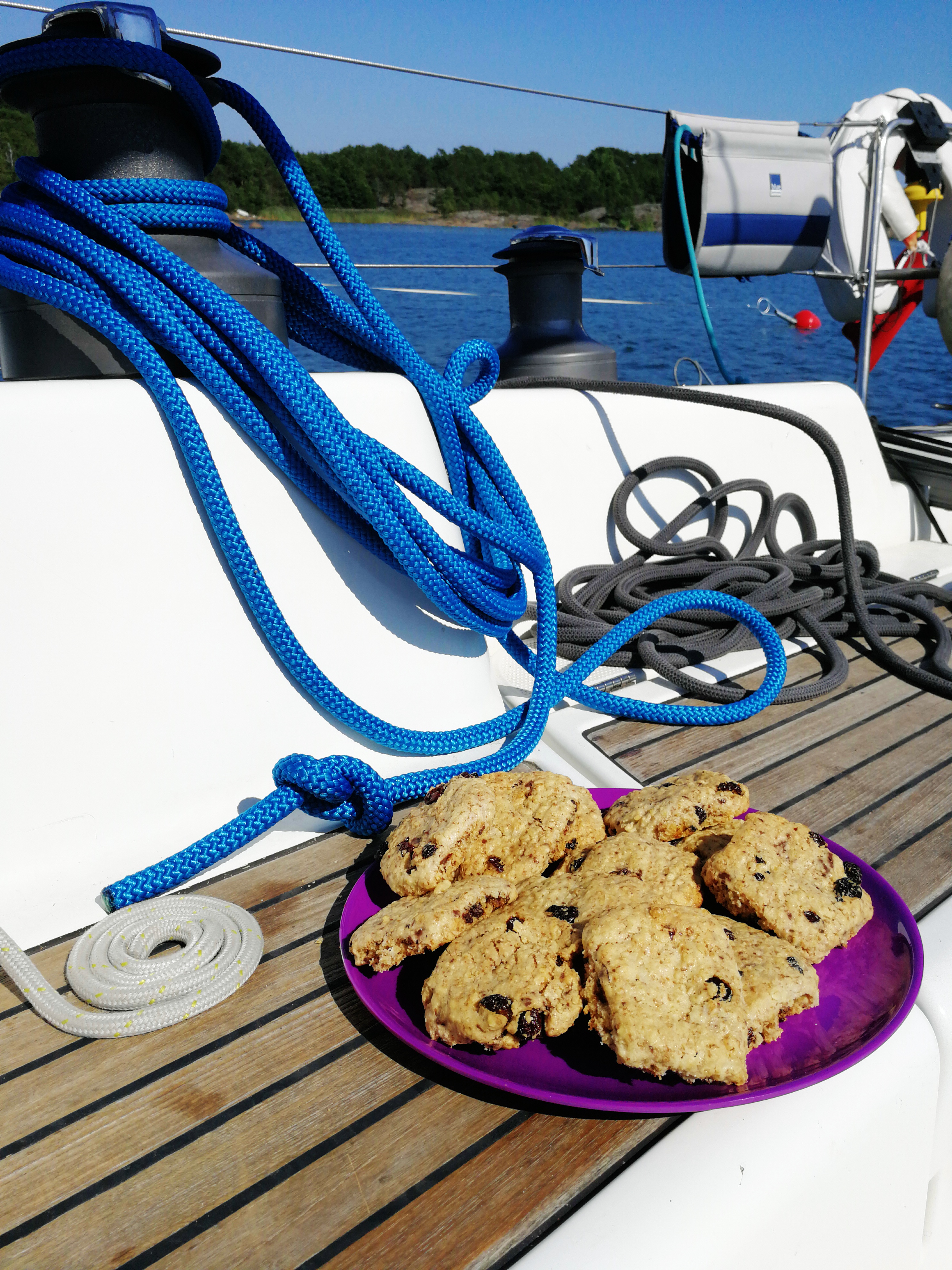 Baked Goods on Board


The Swedish archipelago offered stronger winds than the previous week, and waterproofs were worn almost daily. In contrast to the Finnish flora of mosses, wildflowers and undergrowth, the islands we now encountered were increasingly forested. Ancient timber trees and dense woodland offered brilliant opportunities for morning hikes, returning to the boat for a cup of tea before raising sail again. After a day of intense sailing, we moored in a small natural harbour called Lacka next to a German boat. With several polyglots among the crew, some of us grasped this as an opportunity to practice German, and in the process made a new friend. The next morning, in an effort to consolidate our European relations, we delivered a cinnamon bun via bucket from our boat to his. In Lacka we also had the chance to take a dry sauna in an idyllic wooden hut perched at the edge of the rocks, from which we could plunge into the sea. 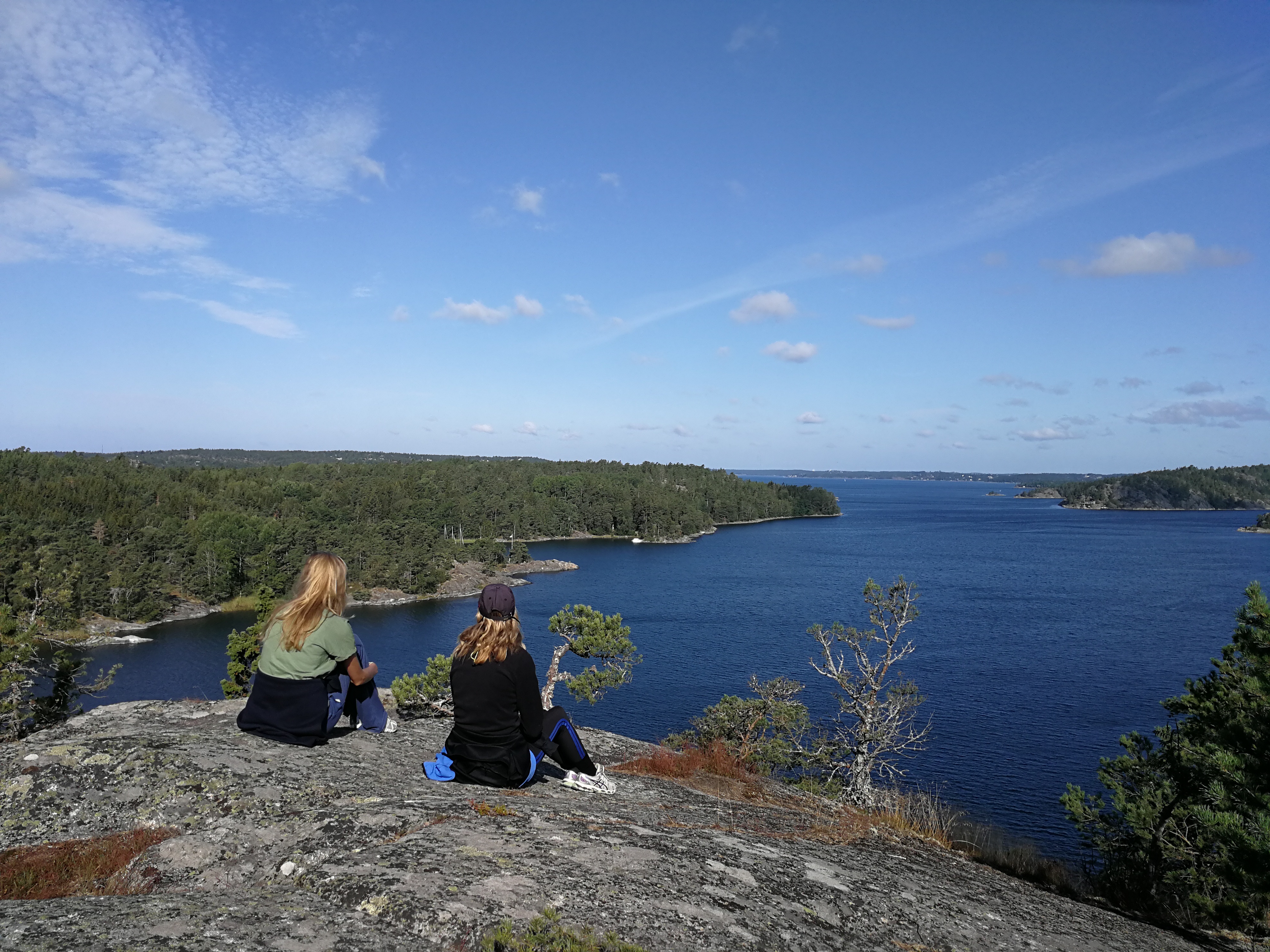 
The second week seemed to pass far more quickly than the first. With our arrival day in Stockholm approaching, a collective feeling of longing was palpable, for more time spent sailing, playing card games late into the evening, and working together as a crew. Whilst the freedom one feels when sailing is unsurpassable, it is the experiences shared with the crew that makes this trip so memorable. I had felt nervous prior to beginning the trip that living together in close quarters with eight people could feel crowded. Instead, it created a sense of teamwork and collaboration that I had never experienced before. Stories were shared, sea shanties were sung, and memories were made with individuals whom you would probably never encounter otherwise. I quickly learnt how important the cooperation is between skipper, first mate and crew members. Hywel’s patience, knowledge and experience all contributed to a feeling of comfort and security on board, where the crew was happy to share responsibilities. 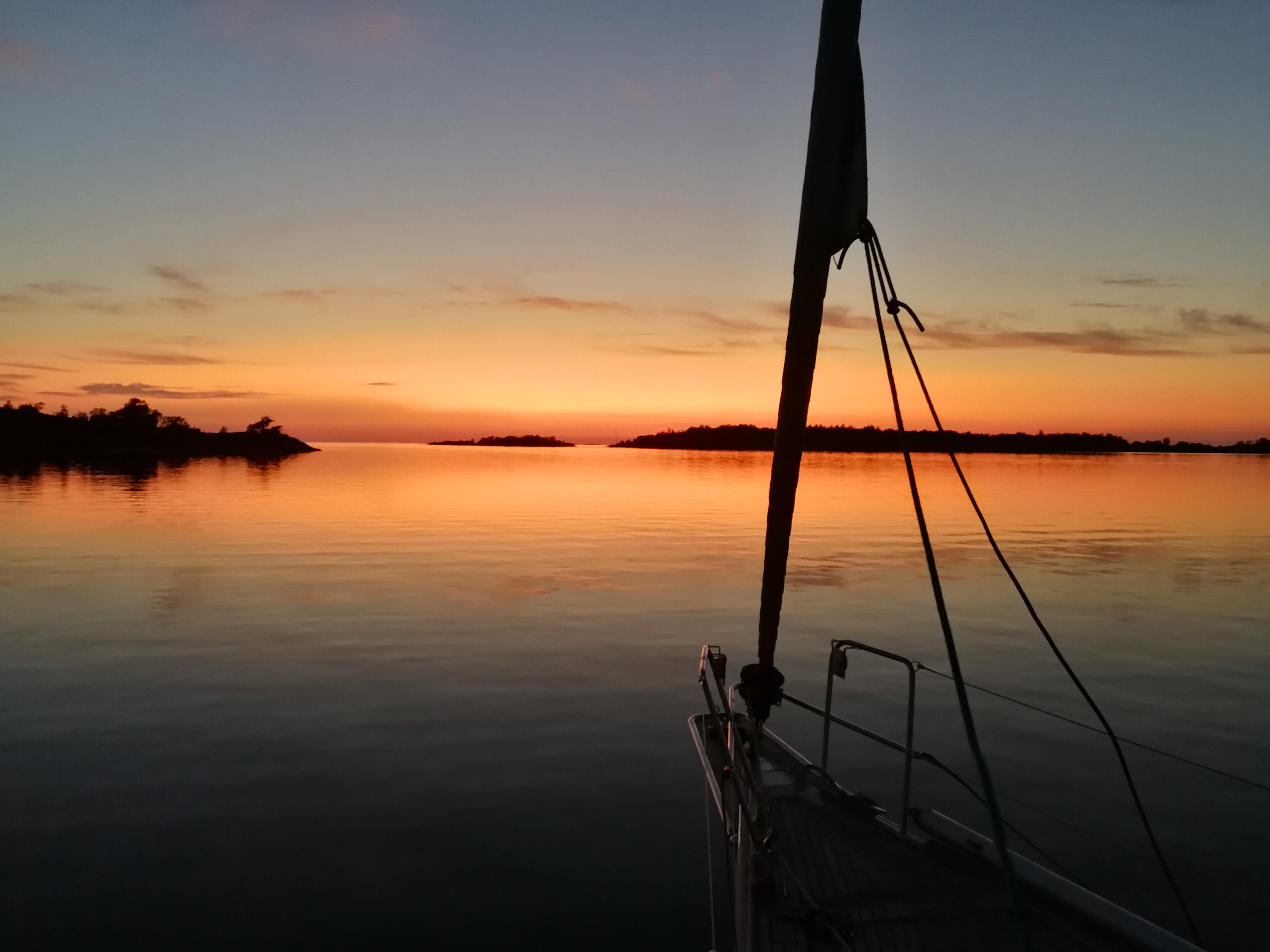 We entered into the port of Stockholm in style, singing along to ABBA’s SOS at the top of our lungs. A crayfish outfit may or may not have been worn by our skipper as we steered into the harbour, but that is perhaps a story best left to the imagination. As we set our final anchor of the trip and stepped on land there was a profound feeling of achievement and joy, but also one of absence, as we left Skylark behind us to return to civilisation. After a fun weekend in Stockholm filled with schnapps and sight-seeing, I returned home, and felt somehow changed. Not only did I feel physically stronger, but I also realised that I had never before felt such a sense of serenity and freedom as one experiences while sailing. Over the next few days I found myself longing to be back on board, and already thinking about future sailing trips. In his initial description, Hywel said that this trip would be the adventure of a lifetime. I wholeheartedly agree.