Tidal races and overfalls and rocks galore (of which we hit none, proving that it is perfectly possible to go into exciting cruising areas without damaging the boat!), sunshine and beaches and crazy shenanigans. Does that sound like your cup of tea, coffee, or other beverage of your choice? Read on …

Two of us had been on board already, helping Hywel with maintenance on our Club yacht Skylark to put her into the best possible condition for the summer programme. At the same time, two others were busy loading carts full of groceries to make sure our crew of eight would have no chance of starving over the next four days. Once everyone had reached the boat in the afternoon, all food and gear was stowed away, and the safety brief was given, we cast off Town Quay marina at 5pm. The berths and lanes are really tight and it was a bit tricky, but we managed to get out of there eventually and started heading down Southampton Water. In front of Bramble bank we practised Man Over Board (twice), and as it was a bit too late for the strong tides in the Needles channel, we then headed east - finally getting the sails up, putting a reef in, putting another reef in (good practice), and preparing dinner: a very tasty asparagus risotto. Once around the eastern end of the Isle of Wight, we set course for Alderney and started the watch system: while three of us kept looking after the ship, the rest went down to catch some sleep (only to be woken up later in the night for their watches in turn).

After a night of sailing and motoring and sailing again, crossing the busy shipping lanes near the Casquets TSS, we eventually caught sight of Alderney on the horizon. Once we got close to this northernmost of the Channel Islands, the until then rather calm sea suddenly built up to surprisingly big waves given the light winds, giving a first glimpse of the strong tidal conditions in this area. Following the transits, we got into Braye harbour and picked up a mooring buoy at half past ten, just in time for a slightly late, long-awaited breakfast. The water taxi took us ashore, we went through the customs formalities with the harbour master [the Channel Islands are not a part of the UK, and outside the EU], and then went for a ramble through “La Ville”, the quaint town of St Anne (2000 inhabitants, a tenth of the size of Ely!), capital of Alderney, and onwards towards the east of the island, coming past a golf course, a big open bay with an anti-tank wall, and a giant puffin! 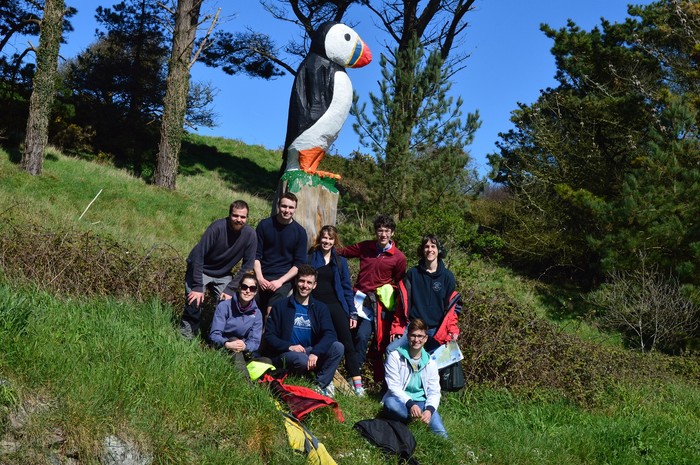 Back at the harbour, we took a closer look at the waves crashing over the breakwater (some managed to avoid being drenched, others didn’t…) 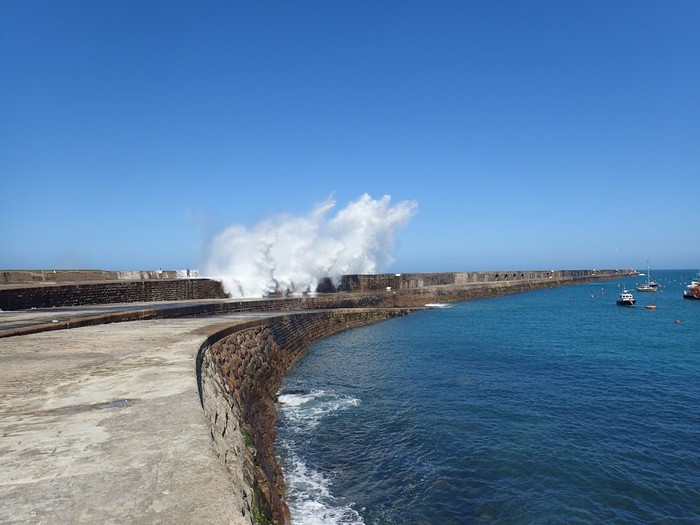 Taking the water taxi back at the last possible moment (the inner harbour falls dry, which is not enough water even for a RIB…), we prepared a lunch of cheesy toasts, and then headed out again, towards THE SWINGE. Given the many rocks, I thought it might be safer to navigate through them under engine, though in hindsight I wished we had hoisted the sails instead: For before long, we were swept along by six knots of tide (13 knots over ground!), which seemed all fun and exciting until we got to the bit marked “DANGEROUS TIDAL OVERFALLS” in the chart… fortunately the weather was very nice, but against the spring tide even the force 3 southwesterly led to waves that bounced the boat up and down and crashed over the bow. Exciting indeed. And bit closer to the northwestern edge of the channel, it would have been less wild. Lesson learned… 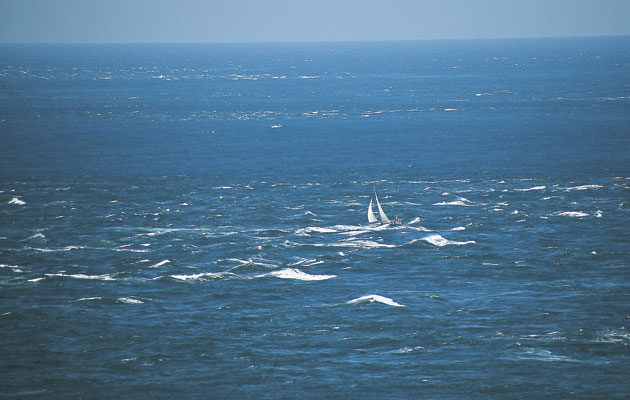 We avoided the rock that nature had put right in the middle of the path of the Swinge, and as quickly as the sea had built up, it calmed down again, and we sailed onwards towards Herm. However, given a forecast F6, we decided to detour through the Little Russel, beating with comparatively short tacks towards St Peter Port to spend the night in the safety (and comfort) of a marina. Everyone enjoyed their one shower of the whole trip… And with no rocking-about, we got treated to garlic mushrooms, tartiflette, AND cake (the latter store-bought, I’m afraid; next time there’ll be a blueberry souffle again…). Only the reblochon could have been a bit more mature!

On Saturday morning, we went out of Victoria Marina as soon as the tide allowed (the sill dries to 4.3m!), looked for the fuel pontoon, but contrary to the information given by a neighbouring yachtsman who had come all the way from Cherbourg just to fill up on VAT-free fuel, everything was closed, and we motored onwards towards Herm. The little passage we had planned to go through was right in the direction of the sun, and the glare off the water made it difficult to identify the stakes that marked the channel between the rocks. So we went the longer way around the outside. Our first stop was Belvoir bay, which in the end was a bit too small for comfort given the depth of water and associated swinging circle (but a good alternative for closer to low water!). Moving on to Shell beach, we anchored at 3m above chart datum, giving us a few hours to explore Herm before the boat would go aground. We reinflated Skyling (Skylet? Skylarkling?) and took the pump along (tube 3 has a small leak…), and rowed ashore. We didn’t even capsize in the surf! Together we walked along the coast path and back along the ridge, but unfortunately didn’t have enough time to see all of it. Even an island of less than two square kilometres left us wishing to have more time, and to come back another day… 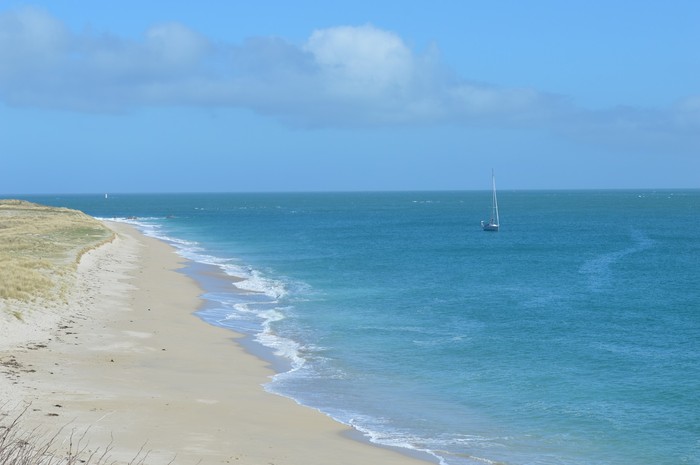 Back at the beach, our boat was still afloat and gently rocking about. The first dinghy load made it across just fine, but when the second half of the crew arrived, one of them was hanging over the back of the dinghy, barely holding on, and rather wet! Was this going to deter us from rowing ashore again? 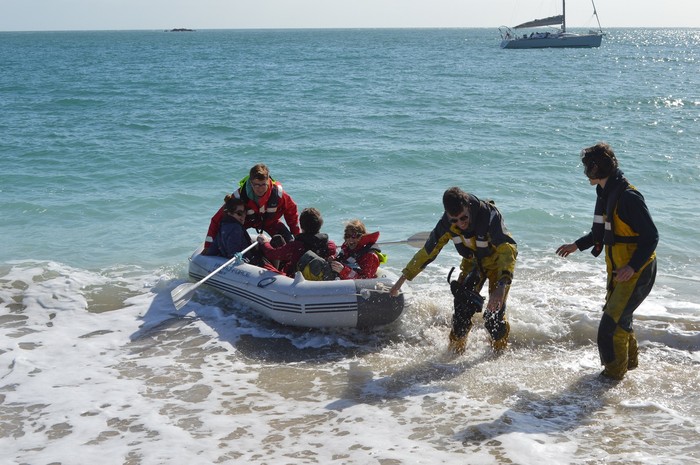 Of course not! A quick sail across to Sark, around the northern tip and down the eastern coast, while munching on a cheese board. Once into Dixcart bay, we dropped the anchor again (now with 40 metres of chain! and 100m of rope should that still not be enough…), double-checked the tidal calculations, and spent several hours exploring island #4 on our trip. Sark is like a table-top mountain: in the middle you can barely tell you are on an island, but the coast is all the steeper for it. Even smaller than Alderney at just around 500 inhabitants. We wrote postcards (and put them into the golden postbox - definitely not Royal Mail, and the Guernsey pounds we got as change are certainly worth more as a souvenir than anything else), looked through the Window in the Rock, had some Iceland icecream (“best flavour”...!?) in the sunshine, and admired the causeway across to Little Sark. 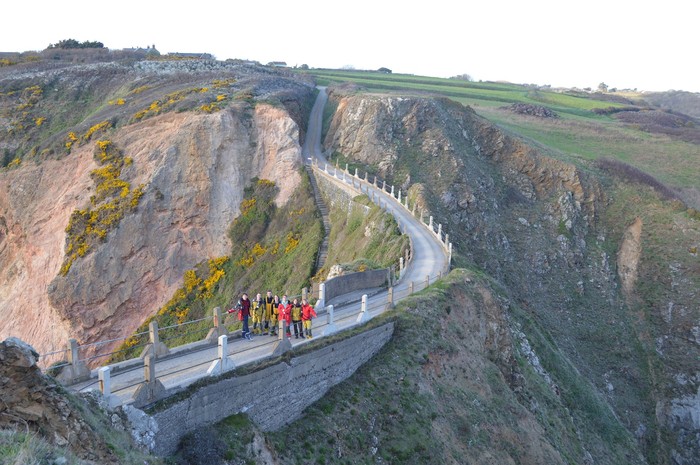 This time the rowing went better already, and unfortunately we didn’t have the bay to ourselves anymore (and my plan to move to slightly deeper water was thwarted) - though I guess having a local yacht as a neighbour should give us some extra confidence in our choice of anchorage! Dinner was ricotta pasta - with walnuts and courgettes, lovingly cooked by our newest Italian skipper. Whilst sheltered from the wind, you can’t really avoid the tide as it changes from north to south during the night, and for a while the boat was rolling in the tidal swell. 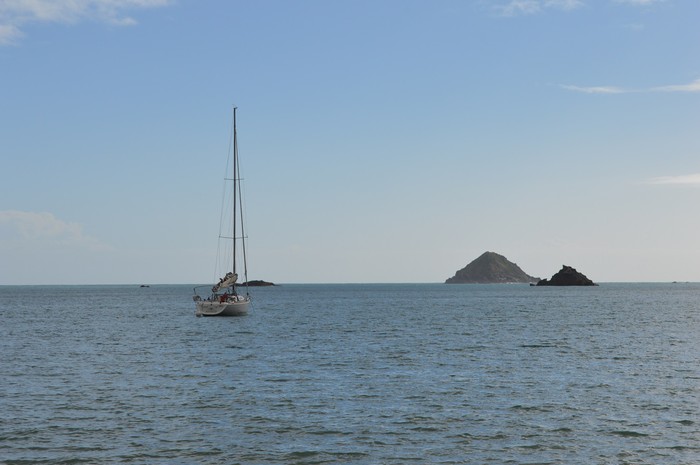 The next morning we got up early to catch the right tides. After breakfast we navigated through the rocks, had another small bit of overfalls, and then went through the Gouliot passage, not much wider than the boat itself! The southwesterly wind from the first half of the trip had turned on our nose again, and we beat across to Alderney, aiming for the Banc de la Schole and the offshore overfalls southeast of Alderney, to get a feel for what it might be like in the Race of Alderney… but in the end everything was rather calm, no comparison to the Swinge on Friday, and on another buoy in Braye we called for the watertaxi once more. While one group went for a walk along the coast to see forts, gannets, cliffs, and the airport, the other half went for a well-deserved break in the aptly named Adventurer’s Rest. 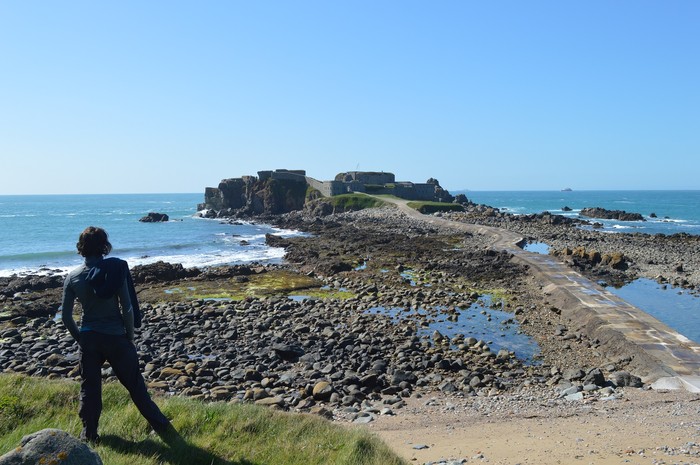 Again we had to get back to the boat before the water got too low, had a late lunch of frittata, winched people up the mast (for lubing the track & enjoying the view), precooked the chilli sin carne con butternut squash for the passage back, and enjoyed the last of the sunshine. As the sun was getting closer to the horizon, we motored out in a dead calm, watched the sun go down and the stars come out and the ISS whiz by, and went for the second round of nightwatches. 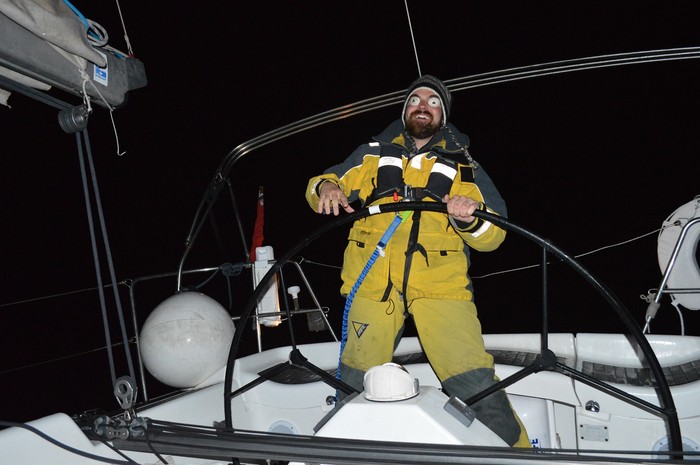 Sailing would of course have been better, but everyone enjoyed the starry night, and the reflections of all the lights on the glassy water. We even saw the MS Brittania en route to Madeira, a floating city lit up like a casino in the dark. With no wind at all, the engine was running all night, but if it’s already noisy, why go slow? And so it was only 3am when we were a few miles south of the Needles (with a perfect Course-To-Steer calculation of a constant heading 015° throughout the night dropping us off right at the safe water mark), and instead of taking the first of the favourable tide around 10am, we just about got through the Needles channel at the last opportunity of the previous tide. Two hours later we had made it past Lymington, anchored in the shallower water on the northern side of the Solent, and went to catch a little bit more sleep.

We woke up to thick fog and stories of ferries blasting their fog horns and waiting for each other. Thankfully, it didn’t take too long to disperse, and after breakfast with fried eggs and baked beans (for some of us, anyways) we sailed off our anchor and went for a detour into Beaulieu river. Finally I managed to get beyond the first bend! We moored up at Buckler’s Hard to fill up on fuel, briefly explored the village (which is, literally, a single street), and had a peek around the next corner where it would become too shallow for our yacht to go any further. Once back to the lower stretch next to the Solent, we gently drifted downwind the last bit of the river under jib and had wraps with the chilli leftovers for lunch. We caught a last bit of sailing back towards Southampton, and then dashed back to the berth so that we could drop off the alternator at a farm in the middle of nowhere to conclude this round of maintenance, and tidy up and clean the boat for the next crew…

That was the end of our amazingly eventful trip, hard to believe it was only four days! 286 nautical miles, 4 islands, 3 anchorings, 2 dinghy trips ashore, 1 rollercoaster :D 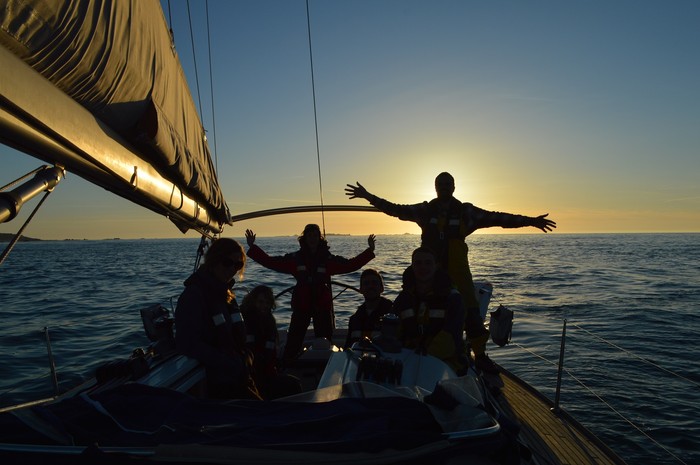