Three weeks in Norway - possibly the most beautiful place in the world..

A cruising log in three parts
Part 1: Stavanger to Bergen, 2nd - 9th September - A tale of the vibration damper and the creepy briefcase man.

They say all great adventures have humble beginnings. Mine started in the bilges. I arrived in Stavanger to find Skylark immobilised with as yet undiagnosed engineering problems. She had mysteriously lost power and there was something wrong with the transmission. Angus had done a great job to get her safely into harbour with crew and boat safe, and it was fortunate that the problem occurred in Stavanger with it's indigenous population of Volvo Penta engineers!

So, since it was Sunday, we hiked up to Preikestolen, the Pulpit Rock which plunges 600m sheer into Lysefjorden. Scary stuff!. But worse then that was the briefcase man! We had put our bags down to take a group photo, only to find a red carrier bag containing two sandwiches was subsequently missing! We spotted it next to a man with a laptop bag and bright white sneakers. Up a mountain? Very suspicious. When approached, he wandered off, leaving the bag. Inside was ONE sandwich, partially nibbled. The scoundrel had stolen and eaten our sandwiches!!! He was the butt of all our jokes for the rest of the week.

With the transmission repaired, reassembled and the engine back in place, we set sail to get to Bergen in time for the next trip, managing to squeeze in a few beautiful anchorages on the way.

My gratitude to the crew for their patience and understanding during the long days in port, for holding oily bolts and torches for me, and for keeping me sustained with tea!

We arrived into Bergen in a spectacular rainstorm and spotted the next crew huddled under a shelter with all the shopping done. Those Mediterranean sun shades come in handy we found as we could enjoy the bright lights and banging tunes of Bergen from our cosy cockpit! It was a great atmosphere, but we were keen to get out into the wild.

I totally love exploring islands and seeking out the most interesting and scenic anchorages, and the next week saw a great variety of stunning places well off the beaten track, varying from tiny clefts in the rock where two anchors were required to prevent swinging and still, secret lagoons, to the dramatic little harbour at Bjordal off Sognefjord. 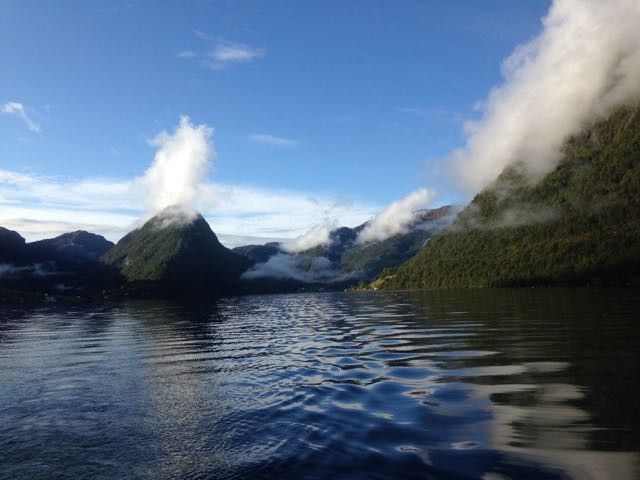 We found Sognefjord itself to be rather too large to be dramatic, and to get to the interesting bits is a very long way inland, but the little side fjords are well worth exploring and provided much more dramatic scenery. And best of all, on the way out with the spinnaker up in calm conditions, Jenny produced a fabulous chocolate cake. Spinnaker and cake - two of my favourite things! :)

Our final anchorage of the week, though not marked as such, was a stunning lagoon accessed through a cleft in the rock and not in the guide book either. These places are sometimes the best, if explored with due caution. With a clear sky and a possible forecast, we all slept on deck and were treated to a light show - the Northern Lights! WHAT a sight that was!! Well worth getting rather cold and damp for - we all huddled in the cockpit in our sleeping bags like a pile of piglets!

With our sails down and turning into Bergen harbour, we were approached by a small orange coastguard RIB. "Have you booked a berth?" the burly looking Viking asked gruffly. (I had to admit I hadn't). "You can't come in, the harbour is closed. There's a bicycle race." "A bicycle race? But this is a boat, matey!!" No amount of assurances that I would not sail in front of bicycles would satisfy them, so with a great deal of pissed-offedness, we hoisted sail and stormed out of Bergen at 8 knots feeling very much like pillaging the nearby islands! Twelve miles further South we found the picturesque surroundings of Bergen Sailing Club and duly helped ourselves to their showers! Pillage accomplished.

Part 3: Bergen to Stavanger, 16 - 23rd September. Possibly the most beautiful place in the world?

With a new crew onboard, apart from Emmy who had sensibly decided one week wasn't nearly enough, and Jamie who we simply persuaded to stay another week (no kidding!), we set sail south to possibly the most beautiful anchorage I've ever seen. Pilapollen, just West of Stord is a jewel - here are the coordinates for future reference: 59º55.43N, 005º15.56E. Highly recommended.

The next day was calm, so we took our time with some fishing (Jamie is now the envy of the CUYC facebook page with his incredible fishing skills!) and had a stonking sail in the afternoon as the wind picked up. But where to anchor for the night? Pilapollen was a hard act to follow! I think we did though. The marked anchorages just North of Haugesund are exposed and feature quarries and industry. Only one place did not, but the only shelter was through a very narrow cleft in the rock which we might not squeeze the boat through, or might be too shallow... We paused to catch some mackerel while we umm-ed and ah-ed about it, but decided to give it a go. Going in at half a knot with crew stationed on the bow to watch for dragons, we were rewarded with a really stunning place all to ourselves, and barbequed fish in the afterglow of the sunset.

'What do we want?' 'Fjords!' 'When do we want it?' 'Well, before the end of the week, ideally, if quite convenient'. So south we sailed until we reached Lysefjord, just inland from Stavanger. This small fjord offers far more drama right from the word go than the big ones like Sognefjord, and is far more accessible, being only about 20 miles long. After much discussion with Tanya, our First Mate, we decided to head in and spend the night at Vika, the only viable anchorage in the fjord.

And what a cracking place it is! Sheer rock walls towering nearly a kilometre into the sky and waterfalls cascading down into the dark water, this is a place of giants! Norway had delivered and in dramatic style. 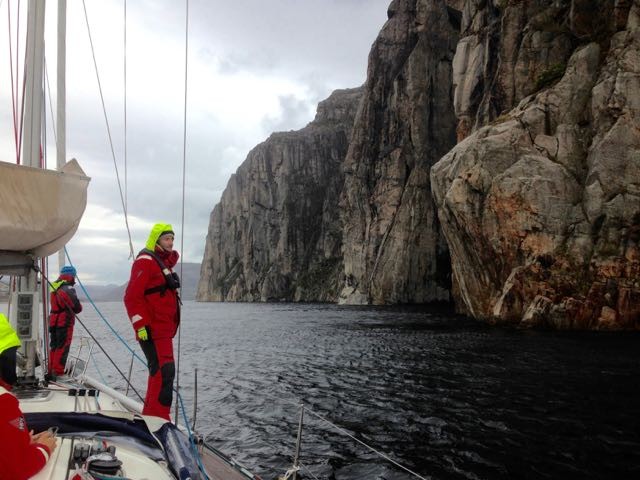 Thank you, very interesting article. Recently there are very interesting things in yachting. I chose this beauty https://2yachts.com/models/1768-crownline-270-cr, I go on it for more than 5 years - I am satisfied.